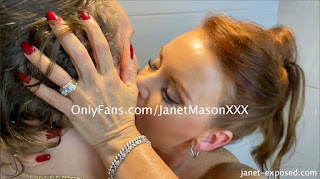 This clip was shot after that hardcore scene, as we showered together and made out. And I mean we really made out! Our our hands roaming all over each other's naked bodies as we kiss deeply and soulfully, his still-firm, youthful erection pressed into my soft, mature belly...me stroking it and driving him crazy....pure sensual cougar/cub heat!

This footage was not intended for official release since we didn't have sex in the shower (given that we had literally just wrapped the hardcore scene, and my poor cub was still a bit nervous)...but since there are so many of you who really like kissing/petting/make-out stuff, I thought I'd post some of it as a bonus for those of you into that.

And yes, I do mean "some" of it...today's clip is just a sample of our entire, long intergenerational shower make-out session that hubby caught on camera! ;-)

P.S. Yes, Ben and I will be getting back together for more cougar/cub play in future scenes after the COVID-19 issue simmer down and it's safe again! We're already planning it!